July 2016 will mark 100 years since the Battles of Fromelles and Pozières on the Western Front, and from today Australians will be able to apply to attend the services in France to commemorate these important events as part of the Anzac Centenary. 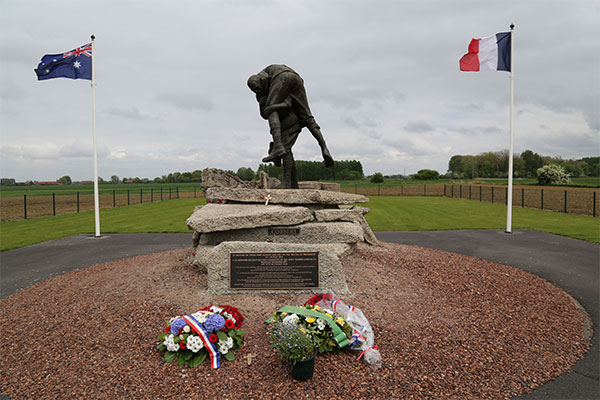 Cobbers sculpture by Peter Corlett from Melbourne. The sculpture is dedicated to the men who fought and fell in the Battle of Fromelles on 19th and 20th July 1916.

“The commemorations in 2016 will be poignant and moving services for Australians remembering 100 years since the Battle of Fromelles, Australia’s first major battle in France, and Pozières, where Australia sustained 23,000 casualties over seven weeks,” the Minister for Veterans’ Affairs and Minister Assisting the Prime Minister for the Centenary of ANZAC, Stuart Robert, said.

“To ensure safe attendance at small cemetery and memorial sites, the Department of Veterans’ Affairs (DVA) is managing a registration process open only to Australian citizens and permanent residents seeking attendance passes for the services, available only until all passes are allocated.

“From 12 noon today applications will open for attendance passes to attend commemorative services at Fromelles on 19 July 2016, and at Pozières on 23 July 2016. Those interested should visit the Department’s www.anzaccentenary.gov.au website for full details on the services and how to apply.

“These services will be a special event for many Australians, particularly those with a family member who served in these battles, and I encourage anyone interested in attending to register early,” Mr Robert said.

As new information becomes available, the DVA websites www.dva.gov.au and www.anzaccentenary.gov.au will be updated and Tour Operators will receive further confirmed information and updates.