CLOSE to 100 years ago Private Michael Bunworth’s possessions were returned to his family after he was killed in World War I.

Among the items was a pocket watch, encased in a gold cover, and inscribed on the inside with the words Gottf. Donarth, Bernsdorf.

But the watch didn’t belong to Private Bunworth. 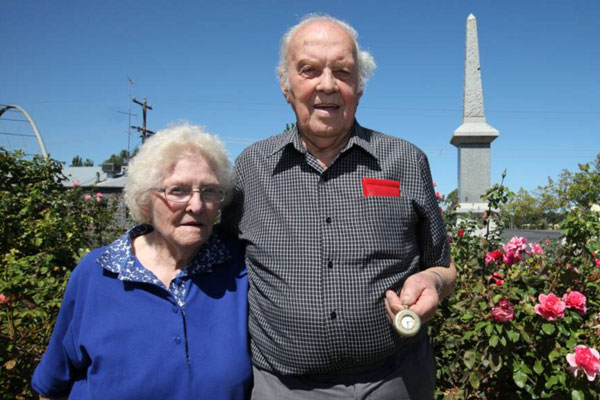 MISSING: Macarthur’s Pat and Jack Bunworth at the town’s war memorial. Mr Bunworth holds the watch that has been in his family’s possession since World War I. Picture: Rachael Houlihan

Today, the watch, which still ticks, is in the Bunworth family’s possession. Michael’s nephew Jack Bunworth, of Macarthur is the caretaker.

But he and his wife Pat want to turn back the clock and return the watch to its rightful owner.

“Michael was killed in 1918 and the watch came home among his effects,” Mr Bunworth said.

“My father had them and he died in 1949 and I’ve had them ever since. I wound the clock up the other day and it still went. My dad told me my uncle took it off a fallen German soldier.”

Mr Bunworth said he wanted to return the watch to the family of its original owner.

“What will become of it otherwise?,” he asked.

“I’d like them to have it back. If it was ours, we would like to get it back. It’s family history. Hopefully we can find them and they will be happy they have something.”

His wife of 61 years shares his eagerness to to reunite the watch with a German family.

“It would be lovely for the family, if it’s possible, to have the watch back,” Mrs Bunworth said.

Michael Bunworth was killed when a shell burst in the trench where he was located.

He is buried at the Outtersteene Communal Cemetery Extension in Bailleul, France. His brother Frank, who was also from Byaduk, was also killed in action.

The Bunworths’ story features in a new short film, Macarthur: Stories of Sacrifice, which will premiere on Thursday.

The 24-minute movie traces the town’s efforts during World War I and explores two families’ connections with soldiers from Macarthur.

The First World War was one of the most significant events in the 20th century, and residents of the small town have united to share their memories.

The project was to assist people to explore the history of local soldiers and nurses who enlisted from Macarthur and its surrounds during 1914 to 1918.

The Bunworths have been part of the project working with residents Maryanne Martin and Terry Sim.

Ms Martin, project facilitator, worked with the Macarthur RSL sub branch and is also helping the Bunworths explore ways to try and locate the descendants of the watch.

She said in 2014 she worked on a project for the Heywood RSL about Condah’s experience during the war years.

“That project went well and the Macarthur RSL wanted to do their own,” she said.

“They asked what they could do and we applied for a government grant. We also got funding from the Victorian Veterans Counsel. We applied to tell digital stories and also produce a book.”

She said the book was 80 per cent completed and the project had taken a year.

“The book still has scope for more stories to be included,” she said.

As well as the Bunworth brothers, the story of soldier Cecil Twist is also explored.

Cecil was born in 1895 and was one of the youngest to sign up for the war effort in Macarthur.

His relative Pauline Trevena investigated her family history for the project.

Ms Trevena discovered Cecil was often in trouble in the army and sometimes his pay was forfeited due to bad behaviour.

He was killed on September 18,1917 while fighting on the Western Front.

“I went to the Macarthur Primary School and the grade five and six students were researching about the war,” she said.

“We held a workshop last July about how to use Trove bad how to look up a soldiers records.”

She said Macarthur was a small but vibrant town during the war years, and every time a soldier would leave, a farewell celebration would be held.

The conscription debate divided residents and in the October 1916 referendum the community voted ‘yes’ 165 to 143.

At the following year’s referendum in December residents voted ‘no’ with 323 against and 188 in favour.

The change was consistent across Victoria.

Ms Martin said interest in the film around the town had been high.

“Tom Lowe from Polygraph Productions has done a fantastic job,” she said.

“It includes footage from the Australian War Memorial archives.”

The film will be launched on Thursday at the Macarthur Primary School from 6pm. The premiere is open to the public.