Condah’s First World War service men and women are set to be remembered in a ceremony next year marking the 100th anniversary of start of World War One.

But families of the Victorian town’s veterans have been left without an honour roll after the honour board went missing from the town hall 10 or more years ago.

Amateur historian Maryann Martin said while commemorations could still be held it would be nice to have the names of the region’s service mean and women on display.

‘It is coming up next year to 100 years since the outbreak of World war One so there will be different Anzac commemorations held all over the place,’ she said. ‘I’m hoping to run one in Condah with the RSL in Heywood and it would be good to find the honour roll.’

Ms Martin said he great uncle’s name appeared on the missing board.

‘My grandmother grew up at Condah and her eldest brother was killed on the Western Front,’ she said.

‘I’ve been doing some research and he’s quite an interesting character. He had poems printed in the Spectator sent from Gallipoli, poems about the conscription debate. I want to find the board so he’s not forgotten. With no board there is nothing to remember him or anyone else from Condah.’

Condah Hall Committee president Graham Thompson said the board had been taken down from the hall when it was painted a decade or more ago. We tried to make made some enquiries back then but didn’t come up with anything,’ he said.

Heywood RSL president Lyall Saunders said the Wallacedale honour board was also missing. We’re hoping someone will read about it and say they’ve got one in their wardrobe or somewhere,’ he said. 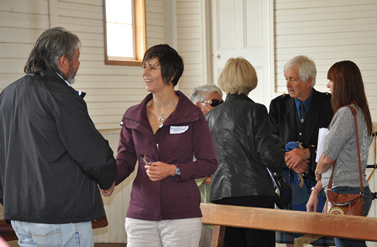 Maryanne Martin with concerned citizens at the Condah hall.